Do You Really Need A Second Monitor?

Home » Do You Really Need A Second Monitor?

There used to be a time when a dual monitor setup was really only for hardcore nerds who needed the screen real estate to spread out so they could see all their stuff.

But do you really need a second monitor?

Dual monitors give you more screen space to work with, makes multitasking better than ever, and bumps up productivity by 20-30 percent. But not for everyone. If your primary use is gaming, live streaming, writing, video editing, stocks/crypto trading, or anything that requires constant referencing and monitoring information, dual monitors are a must. If you easily get distracted and don’t want to divide your attention, stick to a single monitor.

According to a University of Utah-NEC study, the participants saw a 44% boost in productivity for text tasks and a 29 percent hike for spreadsheet tasks when moving from single to dual monitors.

Is that true for everyone? Probably not.

Farhad Manjoo, a tech columnist for The New York Times, ditched his dual monitor setup saying that the 2nd monitor proved to be counterproductive. He says that a dual monitor setup can be an opportunity to indiscriminately fire up a browser tab or window, or get sucked into the YouTube wormhole watching irrelevant videos.

A simple rule of thumb is to start with organization first.

That means that the windows and tabs you have open on your dual monitor setup are those that are relevant for what you’re working on, and close everything else.

If when using a dual monitor setup is too much of a distraction then that tells you you should stick with just one monitor, albeit one that’s big enough for you to comfortably do the work you need to do.

What is the best way to get a second monitor?

Having a second screen allows you to use multiple programs simultaneously—two different displays that would do two different things.

If you are in a voice chat while playing a game, you can see who’s talking in the room or if you are streaming, you can have the live comments on the second screen.

Some applications even have multiple screen modes, like Adobe Lightroom, Premiere Pro and DaVinci Resolve.

But if you’re only a casual computer user who just browses the internet in spare time, a dual monitor setup won’t be a good option.

What is a Dual or Multiple Monitor Setup?

A dual or multiple monitor setup has more than one screen attached to the same computer. Most of the modern GPUs (AMD & Nvidia) and laptops support dual monitors (or more).

You can use dual monitors in two ways:

You can use the “extend your display” option to watch a movie on an ultra-wide monitor-like setup. It will definitely be a cinema-like experience minus the bezels in the center.

A dual monitor setup can also be used for gaming, but the bezels at the center are going to be a major turn-off because your main character or crosshair (for shooting games) is always in the middle. Ultrawide Monitors or Curved Monitors are the perfect fit for gaming—at least in my opinion.

Another (more practical) option is to use the secondary monitor for another app. For instance, you can have color correction tools on the 2nd monitor when editing a video on Premiere Pro on the primary monitor.

What is The Difference Between Two Monitors and One Monitor?

One monitor means a single screen for all your work. If you are gaming and want to see what’s going on in the Discord room, you’ll have to tab out, minimize the game, and switch over to discord.

This sounds uninteresting and time-consuming, considering most budget-gaming setups struggle with quick alt-tabbing.

The point is, with one monitor, you can only use one application at a time. For some people, it is enough and even better than a distracting dual monitor setup. For others? Not so much.

Two monitors offer more space to do your daily routine tasks. You can use both monitors for separate tasks, hence better multitasking. You can just drag one application from the primary display and maximize it in the secondary screen.

With two monitors, you can view two full-sized windows at once, or even split them with half-width windows and have four different programs or documents visible at once.

How Many Monitors Can Be Used in a Multiple Monitor Setup?

More monitors require additional space, investment, and computer resources. Most of the computer setups and laptops support dual monitors, but if you have a dedicated GPU like the RTX 3080, you can go for up to four displays.

If you really want to push the boundaries, the Matrox C680 supports up to six 4K/UHD displays. There is no limit to how many monitors you can set up in a multiple monitor setup as long as you have the necessary graphics processing power.

Even if your GPU does not have a second display port, you can directly hook up a display from your motherboard VGA port. You need to have a CPU with an integrated GPU for this to work. Another option is to use a USB connector.

What You Will Need

You’re probably going to want matching monitors, or at least two monitors that output at the same refresh rate and resolution too. This helps in creating a seamless visual experience across the screens. But this is not necessary; you can go for an entirely different brand, frame rate, and resolution depending on what you intend to use it for.

Here are a few options for your to choose from:
Table could not be displayed.

Apart from the monitor itself, you need a computer that supports a dual-monitor setup. Most of the modern GPUs and laptops work flawlessly with a second display.

And yes, don’t forget to account for the extra space that the 2nd monitor is going to take on the desk.

How To Do It

Setting up a second monitor is surprisingly easy. You don’t need any additional software or whatsoever.

You’ll find multiple ports at the back of your GPU, as shown above. The types of ports available can vary, but you’ll find HDMI on most of them. Just plug the HDMI cord in one of the ports, and VOILA!

You might need to configure the resolution and scaling in the display settings of your computer/laptop.

The Advantages of Using Dual or Multiple Monitors

Imagine no alt-tabbing, no delays or whatsoever?

Seems like a dream world? Dual or multiple monitors are perfect for using programs simultaneously. You can have photoshop on one side and Spotify on the other. This is the prime reason why people go for multiple displays.

People who work with single displays understand the misery of switching to another application. It can be really slow at times and even cause a system crash. Moreover, sharing data between applications is smooth and convenient with multiple display setups. For instance, if you want to upload a photo from a folder to a website on Chrome, just open that folder on one display, Chrome on the other, and drag and drop it.

Multiple monitors are a gift from the stars for writers, programmers, journalists, and people who have to reference critical information. You can set up a vertical 2nd monitor along with your primary screen and have all the necessary right in front of you.

Suppose you are drafting an email using source material, comparing products side-by-side, coding using some technical documentation, or maybe just watching a YouTube tutorial on one side and implementing on the other; a second monitor can speed up the process by tenfold.

COVID 19 is all about Zoom meetings and work from home stuff. Remote work is the new normal.

Suppose you’re in a virtual sales pitch and need to refer to some data. A split-screen on a single monitor will squeeze everything and possibly ruin your presentation.

Or maybe you have to share your screen for a coding tutorial while keeping up with the questions in the chat?

Think of it as a visual extension of your workstation. You can see your colleagues on one screen while simultaneously collaborating with them on a project on the other.

It goes without saying that additional monitors will cost some extra bucks. Not to mention the subsequent processing power required to power up those monitors.

Two 24” monitors on the same desk take tons of space. If you have limited space on your current table, a second monitor will cause a hindrance in your workflow and reduce space for other peripherals like the keyboard and mouse.

Solution? The Cubiker Modern L-Shaped Computer Office Desk has enough space for two monitors on one side and a laptop dock on the other. 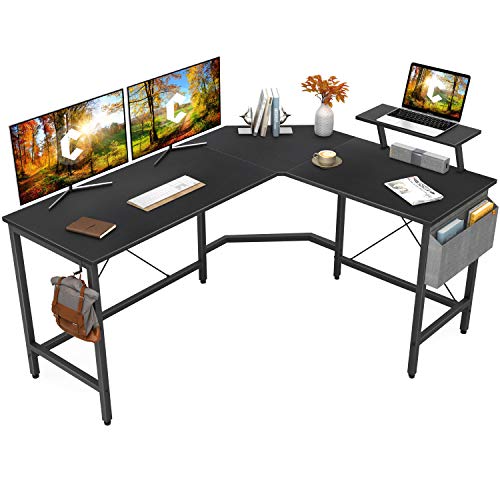 Pro Tip: Go for a fully adjustable monitor desk mount stand to save tons of money and space. 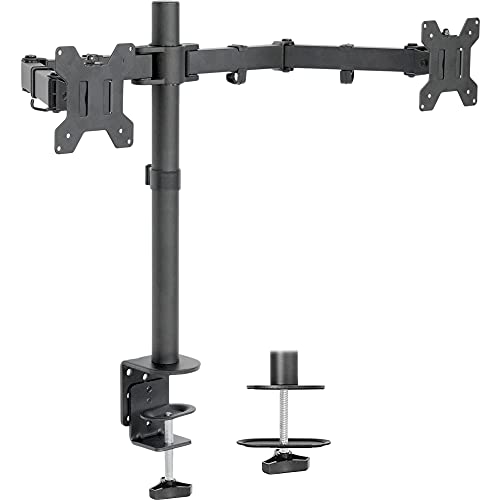 Most of the dedicated GPUs support dual monitors with little to no impact on performance, considering you have a decent GPU like GTX 1660. You might feel a minor reduction in performance and lower Frames Per Second (FPS) if you are watching a YouTube video and playing a game simultaneously.

But still, multiple monitors require additional computer resources and the number of monitors that you can hook up with a PC is also limited to how many the GPU can support.

A second monitor is sometimes like having a delicious chocolate pie right in front of you while you’re dieting. It can be potentially distracting if your work just requires a single screen. You will be tempted to open Netflix or watch the local soccer game just because you see your 2nd monitor all empty and dark.